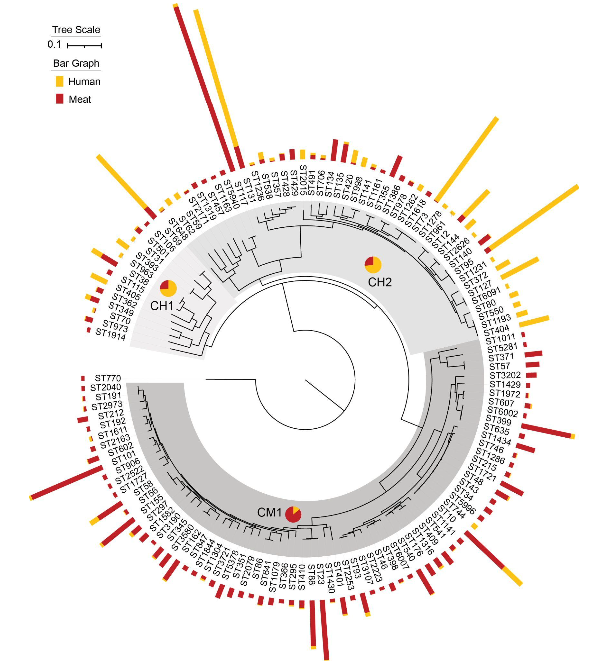 Background: Escherichia coli colonizes a broad range of vertebrates, including humans and food-production animals, and is a leading cause of bladder, kidney, and bloodstream infections in humans. Substantial evidence supports foodborne transmission of pathogenic E. coli strains from food animals to humans. However, the relative contribution of foodborne zoonotic E. coli (FZEC) to the human extraintestinal disease burden and the distinguishing characteristics of such strains remain undefined.

RESEARCH IN CONTEXT Evidence before this study. Previous research dating back to the 1960s suggest that urinary tract infections could be caused by foodborne zoonotic E. coli (FZEC), but at the time that we initiated this study and at the time of submission, there were no reliable estimates of the proportion of human extraintestinal infections caused by FZEC strains (most recent Pubmed and Scopus reviews conducted on 06 July 2022).

Added value of this study. This paper describes a novel genomic/statistical approach for identifying host origins of E. coli strains. By applying this approach to a well-characterized collection of clinical E. coli isolates, we provide the first published estimate of the proportion of sporadic extraintestinal infections caused by FZEC strains in the United States.

Implications of all the available evidence. The results from this study suggest that a material portion of human extraintestinal infections, especially urinary tract infections, are caused by FZEC strains. This opens the possibility for reducing the burden of E. coli disease by preventing these strains from entering the food supply.